I like nothing better than picnic on a hot summers day in France; along a river bank, beside a lake or the sea or enjoying a mountain vista. Generally speaking the south of France is hotter than the UK and it is more of a challenge to keep the picnic cool. Enter the Arpenaz 26, a cooler bag developed by Quechua for the French company Decathlon. I was recently sent one to test and review.

When the package containing the Arpenaz 26 arrived I was more than a little sceptical. How could anything that small contain a picnic for a family let alone keep it cool for any appreciable length of time?

OK, I knew from the information sent out that it was expandable so it would undoubtedly be bigger than it first appeared. However, cool boxes or bags are bulky due to the insulating materials and the Arpenaz 26 gave the appearance of not having enough bulk to do the job properly.

The first thing I noticed was the weight; or rather the lack of it. At less than 1kg it and no more than 30cm x 40cm x 12cm when deflated it could easily be stored without taking up too much space. This is especially advantageous if I stay, as I often do, in mobil homes or small apartments. An elasticated strap, fixed at one end so you don’t lose it, keeps the cooler compact.

One of the innovations of the Arpenaz 26 is the self-inflating technology. The strap is removed before inflating and the air valves opened. There are two valves, one on the lid and one on the front of the cooler. I followed the instructions and left the cooler to inflate itself. It took almost four minutes to inflate, enough time to brew a coffee. However it was not quite fully inflated and, as suggested in the instructions, needed to be inflated manually. All it took was one long puff through the front valve. The valves are then closed and the cooler is ready for use.

The science behind the Arpenaz 26

Now for the technical bit; non-techies can skip this bit.

Apparently the material on the inside, the silver lining, is designed to keep the cold in. The material used on the outside deflects solar radiation and reduces the impact of heat. Between the two the Arpenaz 26 makes use of the wonderful insulating properties of air. Although the technologies used in the materials are advanced the principle of keeping cold in and heat out is simplicity itself and in various forms what most coolers use.

Fully inflated the dimensions are 30cm x 40cm x 42cm which means the capacity of the Arpenaz is 26 litres.

I needed to try out the Arpenaz 26 so it was the perfect excuse for a picnic. Ice blocks and picnics were put in and the zip lid closed. Despite a picnic for two, several water bottles and the ice blocks it was far from full. There was ample space for picnic supplies for a couple of friends or children (ours have flown the nest).

An adjustable shoulder strap is firmly fixed to the sides but I found the bulk a little awkward to carry and I would not want to carry it too far.

The Arpenaz 26 cooler was left in the car, in the shade while we spent three hours enjoying the countryside. When we returned the shade had vanished and the car was in full sun. It would be a real test for the cooler. Our experience with rigid cooler was that the interior would be only marginally cooler than the inside of the car so I was not, despite the marketing blurb, expecting too much from the Arpenaz 26.

I have no idea what the temperature inside the car was but it was like a furnace. Taking the cooler out I was surprised at how cool the outer surface felt. Obviously it was doing what it was designed to do and deflecting solar radiation. Opening up the lid I felt the chilled air waft past my face. This all looked, or rather felt, rather promising.

The picnic inside was as chilled as when it had been put in. The drinks were wonderfully and refreshingly cool; the picnic itself was fresh; the salads were cool; and the butter for the rolls was still to solid to spread. I found it difficult to believe that anything could have been kept cool in the furnace of a car left in the sun.

Without the use of thermometers it was not possible to give temperature lost over time data for my “in the field” test. However the independent test technical data of the Arpenaz 26 shows it takes 11 hours for the interior temperature to rise by 10°C in ambient temperature of 32°C.

The results of my test and the test under laboratory conditions are very impressive. This is certainly a product I will be taking to France when I head off on camping/caravanning holidays.

Do I have any gripes? Yes, there are a couple of minor ones in addition to the awkward to carry gripe mentioned above. The pale colour of the exterior (which I realise is necessary) does mark very easily. I am also worried about the possibility of puncturing either by sharp objects on the outside or sharp implements such as knives and the cutlery stored inside. A puncture would render it less effective.

However despite these minor issues it is a top class product. It is well made and looks durable; I haven’t had it long enough to test the durability but I will come back to that in a few months. At £32.99 it is great value for money if you like the outdoors or just the occasional picnic.

The Arpenaz 26 is made by Quechua for Decathlon. It can be purchased in store or online at www.decathlon.co.uk. The following embedded video from Quechua demonstrates the innovative Arpenaz 26.

This review was originally posted on France Unpacked’s sister website www.travelunpacked.co.uk and has been edited for this website.

Declaration: The Arpenaz 26 was supplied by Decathlon for review by me. I value my editorial independence as do my readers. As such any review will be an honest appraisal of the product as I see it. This is not a sponsored post (any sponsored post will be clearly marked as such).

Brittany Ferries operate cruise ferries to France in the Western Channel. Each vessel in the fleet is a well appointed luxury ferry (read a review of one of their ships) with a full range of facilities and a choice of eateries. It was a surprise to learn that since my last crossing with them they have introduced a budget crossing known as Brittany Ferries Économie.

Brittany Ferries use The Etretat on the Portsmouth-Havre crossing. So how “no frills” is the Économie service on the Etretat? Would I be travelling on a freighter with just a nod to fare paying passengers? 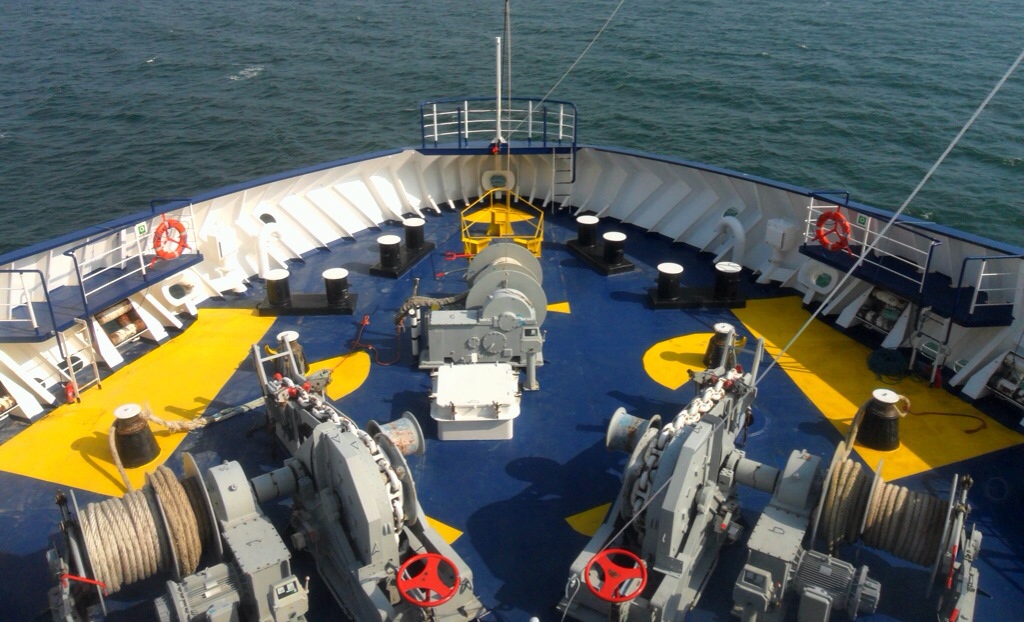 Check-in at Portsmouth was smooth with the usually friendly Brittany Ferries staff making me feel welcome before I had even boarded the ship. Almost immediately boarding commenced and I was surprised to be directed to an open deck as I have always travelled on the inside of ferries to France safe from the elements. This might be a bit of an issue in rough weather as salt water spray and vehicle bodywork do not mix well. 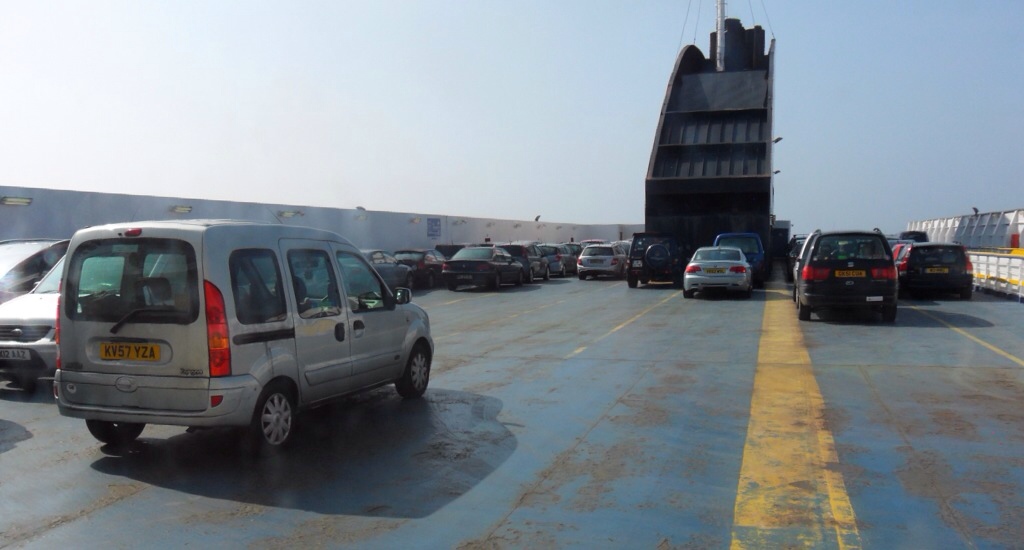 Instead of the utilitarian decor I had expected the interior was all glass, chrome, faux wood and a marble style floor. It was a modern maritime theme with curved lines and wave patterns on many of the glass panels. Seating was mostly faux leather whether it was the chairs at tables, couches along the walls or the paid for lounge chairs. 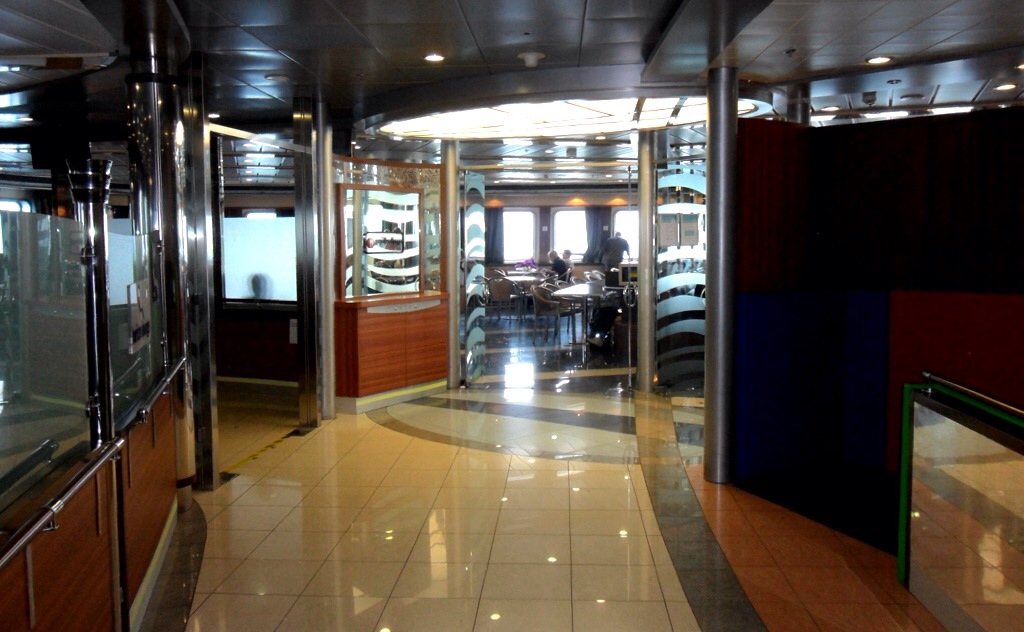 Although you get the same excellent service from the staff on board it is in the facilities available where the economy experience is most notable. There is a single self-service restaurant with a limited choice on the menu and only one bar.

The Etretat ‘s duty free shop is small by any standard. Anymore than two people shopping and it is crowded. There is a small cinema and two lounges where for £5 you can use one of the reclining lounge seats. There is a seating area in front of the bar and another adjacent to the restaurant; both are basic table and chairs seating with couches along the walls. There is a small soft play area for children.

The only way to get foreign currency on board is to use the ATM, which I discovered was experiencing a technical malfunction on the day I was crossing. Make sure you change your money before you leave home or you could end up with no cash when you arrive in France. 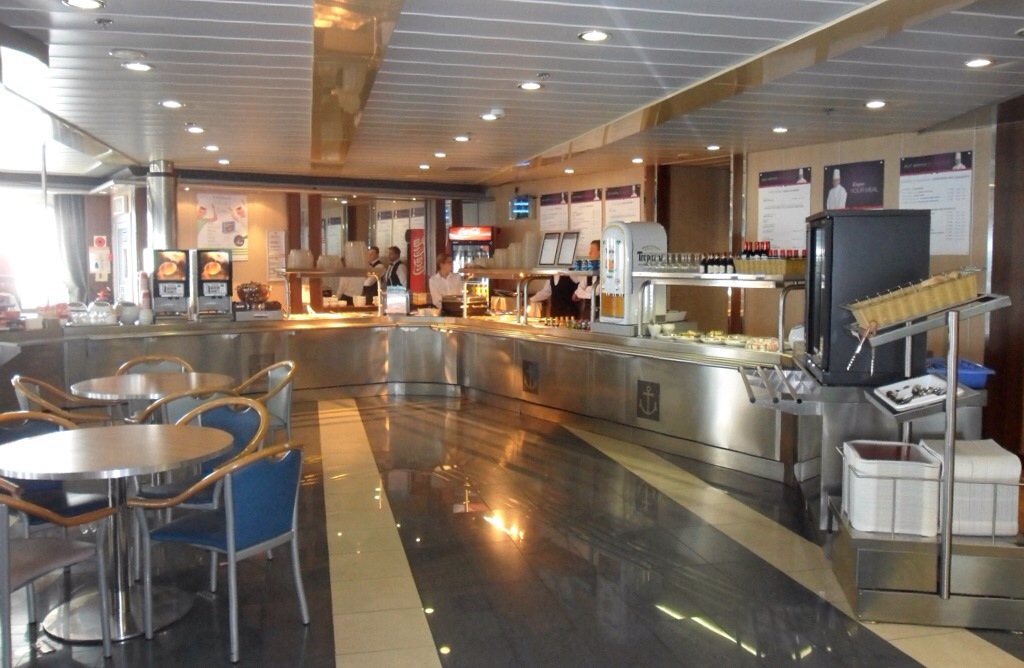 Although it is small the self-service restaurant has a good, though limited selection of food and drink. The “economie” concept does not extend to the quality of the food which was great. For main course there was a choice of two fish dishes, a vegetarian option and three meat dishes. Snacks are available from the bar and from vending machines. The latter also dispensed hot or cold drinks.

Like the “no frills” airlines you can purchase extra comforts. Basic cabins (ensuite but not carpeted) for four people can be booked or purchased on board or online when booking your ticket. Reclining seats in one of the two lounges are also available.

The “economie” experience was not immediately obvious even though I had travelled on the cruise ferries Brittany Ferries operate in the Western Channel. Those who prefer al la carte eateries, bars with a larger selection and even onboard entertainment will be disappointed. If you are content with less choice of shops, bars and restaurants then you will find the Économie service more than adequate. For the budget conscious or those who would like to spend their money on other elements of their holiday there are great savings to be made.

I had expected a maritime version of the budget airlines but it is far from that. Continuing with the aviation industry comparison the Brittany Ferries economie service is more like the difference between travelling economy class instead of business class. However you look at it the service is pretty good for something labelled economy. The usually excellent Brittany Ferries service does not suffer.